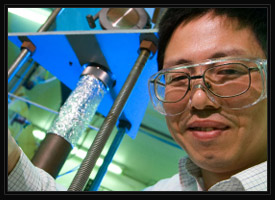 A major new international research institute that will address the problems of a rapidly changing world and develop innovative solutions was launched in Brisbane tonight.

UQ Vice-Chancellor and GCI Board Chair, Professor Paul Greenfield, said that the new Institute represents a major commitment by the University and signals a new way of doing things.

It will focus on a world where the biggest challenges of the future are interconnected and of a global scale.

“To tackle these challenges effectively you need the best minds from different fields of research, all working together,” he said.

“UQ has many brilliant people across the spectrum of research who will investigate ways of anticipating and responding to global change.”

Three focus areas for research at the GCI will mirror some of the most urgent areas: water sensitive cities, climate change and food security.

Director of the Global Change Institute Professor Ove Hoegh-Guldberg said the GCI would harness the significant intellectual prowess of the University of Queensland to help solve some of the biggest challenges that face us as a global society.

“The GCI is about helping the communities of a changing world to find long-term sustainable solutions,” he said. “What is exciting about this challenge is that many of the technologies and approaches already exist. All we need to do is to work out how to implement them.”

“The new building to house the GCI will be an example of modern “green” technology in action. Made possible by a $15M gift by philanthropist Graeme Wood, it will employ sustainable design, construction and operating practices, including Australia’s largest solar photo-voltaic grid electricity generator. This alone will reduce the St Lucia Campus’s peak electricity consumption by 6 percent and carbon emissions by 1.14 kt CO2e per annum.”

The GCI aims to consolidate UQ as a leader in contributing to the analysis of contemporary complex issues and to developing appropriate solutions. It will provide both a platform for UQ researchers contributing to the development of solutions, and a distinct community access point.

Professor Hoegh-Guldberg said: “One of the big signatures of our time is the ever quickening pace and scale of change.”

“In terms of global population growth alone, the numbers are nothing short of breathtaking,” he said.

“The problem comes down to the fact that the number and aspirations of people are increasing, while our ability to provide the essentials such as food, water and energy are decreasing. ‘In a nutshell’ increased population size and per capita consumption threaten to overrun resource demand at many scales. Some major new thinking is in order.”

Professor Hoegh-Guldberg said the current generation of young university graduates was keen to accept the challenges and to think outside the box. “Their passion about these global issues is not surprising”, he said.

“After all, the problems created by current and previous generations will soon mature, necessitating future generations to find the solutions.

Ove is the founding Director of UQ’s Centre for Marine Studies (CMS) and a trailblazer of scientific research on climate change, particularly relating to corals. The Director of the Australia Program at Stanford University since 2002, his awards include a Queensland 2008 Smart State Premier’s Fellowship (2008 – 2013);and the Eureka Prize for Scientific Research (1999). He is currently the third most cited author in the area of climate change, and has published over 170 peer-reviewed scientific articles. He has built a successful marine studies program at UQ, and has combined his academic and research activities with worldwide communication and engagement with industry, government, the non-government sector, research organisations, and communities.

Barry was formerly the Manager, Strategic Planning Integration and Improvement at Brisbane City Council (BCC), and has held a series of BCC senior management positions over more than 18 years. Recent outcomes of his work include the Moreton Bay and Catchment Partnership, a drought strategy for Brisbane, and BCC’s first whole-of-cycle water strategy. He has many current and past positions in organisations devoted to issues of water, planning and natural disaster responses.

Robert Hill was elected as a Liberal member of the Australian Senate from July 1981 to March 2006, representing South Australia. He was born in Adelaide, South Australia, and was educated at the University of Adelaide and the London School of Economics, where he gained a masters degree in law. His father, Murray Hill, was a prominent Liberal member of the South Australian Legislative Council. He was a barrister and solicitor before entering politics. Robert was elected to the senate in the 1980 federal election and took up his seat on 1st of July 1981. Professor Hill was Vice-President of the Liberal Party in South Australia 1977-79 and President 1985-87. He was a member of the Liberal Party’s Federal Executive 1985-87 and 1990-93. He was a member of the Opposition Shadow Ministry 1988-96, holding senior portfolios such as Foreign Affairs 1989-93, Defence 1993-94 and Education, Science and Technology 1994-96. He was Leader of the Opposition in the Senate 1990-96. Robert Hill was Leader of the Government in the Senate from March 1996 until his resignation in January 2006. He was Minister for the Environment 1996-98, Minister for the Environment and Heritage 1998-2001 and Minister for Defence from November 2001 to January 2006. Like many South Australian Liberals, Hill belonged to the liberal or moderate wing of the Liberal Party. On 15 March 2006 Professor Hill resigned from the Senate, and two days later was appointed Permanent Representative to the United Nations for Australia, replacing Caroline Millar. In July 2009, he was appointed to head the Australian Carbon Trust. He is an Adjunct Professor in Sustainability, United States Studies Centre, The University of Sydney.