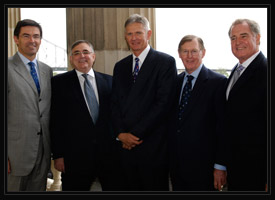 In a ceremony held at UQ’s Customs House, Mr Wood and Mr Brice (co-founders of accommodation website Wotif.com) committed $8 million worth of Wotif.com shares between them with Mr Brice pledging a further two million shares over the next two years and Mr Wood pledging a further $2 million over the next five years. According to Wotif.com’s share price in late February this equates to an overall total of approximately $18 million.

Mr Brice and Mr Wood said the motivation to create the fund followed a universal trend of benefactors wishing to become more engaged with their contributions.

Discussing the ongoing trend, Mr Brice commented: “Engagement with the donation process is desirable because it offers accountability and motivation. Donors are interested in being actively involved in the process and seeing the positive impact that their support has on the individual, industry or the community.

Mr Wood said he and Mr Brice hoped the opportunity to personalise the process, would help spark an increase in the level of educational philanthropy throughout Australia.

“In the US it is a practice for major universities to have an independent body that philanthropists can direct their contributions through and retain a degree of control over how their money is spent,” Mr Wood said.

“We recognised the opportunity for a similar avenue for support at UQ.”

UQef will be overseen by a board consisting of UQ alumni and prominent business people including Mr Wood, John Wiley of Carnegie Wylie, Tim Crommelin of ABN AMRO Morgans and Darryl McDonough of Clayton Utz, who will ensure the expectations of benefactors are met.

UQef will work in partnership with UQ to provide the best possible outcomes for the students of UQ and the future of the University.

The University of the Queensland’s Vice Chancellor, Professor Paul Greenfield, said the UQef initiative showed tremendous foresight, and was an initiative that universities everywhere would welcome.

“We are delighted that Andrew and Graeme have chosen UQ as the target of their personal generosity and the prescribed private fund,” Professor Greenfield said.

For further information, or to arrange an interview, please contact: